Minstrel, by sagasketchbook, at DeviantArt. 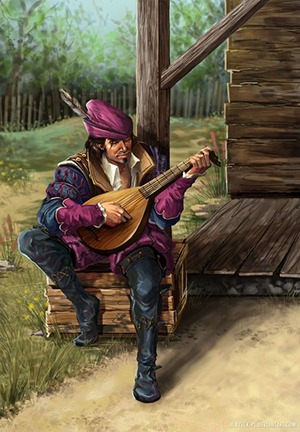 Jaskier, by BlazeCK-PL, at DeviantArt.

In the first years of working on my novel, Braided Dimensions, I shared the chapters with fellow writers, mostly women. Several years into it, I had opportunities to exchange writing with men. It was eye opening and exciting to realize that Kay, the main character, immediately became a love interest for male readers, just as Baird was pretty consistently a hot and compelling draw for female readers. Because Kay tells the story, there’s a limit to the observations she can make about her own thinking and personality. But no problem. The male readers immediately filled in and felt they knew exactly what she was like inside: vulnerable, strong, and so on.

Now, seven+ years into the project, the novel is completed and I have friends reading the completed novel. One male friend gave me a new surprise: he identified with Baird, lived the novel experiencing himself as a bard of medieval times, journeying far and wide, living close to nature, according to the codes of the free bard. It’s fun to picture those possibilities for the reader.

I’m including a couple of fantasy images of bards to give the flavor. I suspect my image of Baird is colored by Tolkien’s descriptions of Aragorn (Strider), an important male figure in my adolescence, if he carried a harp or mandolin in place of a sword, or in addition. (This would be based on the books, not the films!)